Hebrew Books in Italian Libraries of the Modern Age digital

di Pier Francesco Fumagalli
Anno: 2011
Jewish libraries are a valuable source «for the study and history of the handwritten book in all other civilizations around the Mediterranean in general». Collections of Hebrew books in Italy at the end of the XVI century were remarkably rich, both in quality and in quantity. Printers established their activities in several cities and made use of them. Private Jewish libraries were usual in Mantua, Ferrara, Modena, Venice, Verona, Rome, Florence, Trento, Turin since the Renaissance. Moreover, princes and popes, friars and cardinals, paid great attention to Jewish books. Most of these manuscripts, however, were later transferred to public libraries when religious orders were suppressed. The 17th century was characterised by the flourishing of scientific academies and public libraries – such as in Bologna and Milan – where Hebrew books were collected.
€ 6,00
Achille Ratti e la Cina. Lettere di Padre Albino Ronzini (1908-1909) digital

di Pier Francesco Fumagalli
Anno: 2008
Pio XI (Achille Ratti), when he was Pope, proved constant attention to the Church in China; in 1926 he consecrated the first six Chinese bishops in St Peter. His interest in Chinese culture dated back to his early years in Milan, where he had been Doctor and chief librarian (Praefectus) of the Ambrosiana. Ratti’s correspondence is kept in the Ambrosiana and a census of it is now being prepared on the initiative of the Centro Internazionale di Studi e Documentazione Pio XI. Some letters testify to the human and Christian sentiments which inspired Ratti’s relations with father Albino Ronzini, of the Institute for the Foreign Missions of Milan, who was missionary in China, in 1908- 1909.
€ 6,00
Primi acquisti di libri cinesi all’Ambrosiana digital 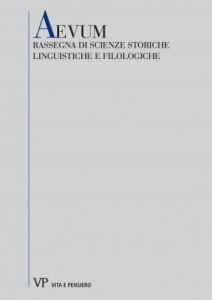